Bob's latest interview was on the radio show, Called to Communion, with host Dr. David Anders on May 4, 2016.

Bob gives a testimonial in regards to the 25th anniversary of the American Disabilities Act, and how it impacted his life before and after its inception 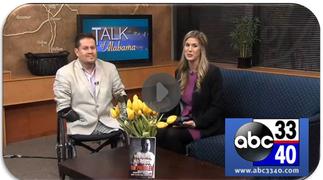 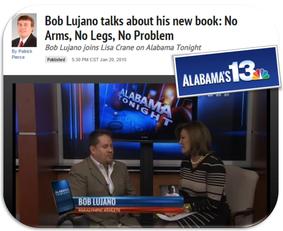 CBS News article about Bob meeting and receiving a blessing from Pope John Paul II, as also told in his book. 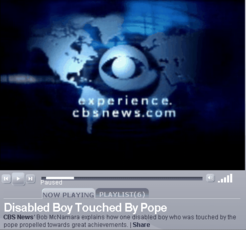 You can watch the full Murderball documentary here. It's easy to see why it won the audience favorite award at the Sundance Film Festival as well as earning an Academy Award Nomination for Best Documentary.

Lady reporter: And now, an extraordinary sports story.
Man reporter: Yes, Bob Lujano, a Paralympic athlete, and a disabled person with an incredible life story. This man lost his arms and legs at the age of nine. He had all reasons to feel pity for himself and drown in sorrow, however despite all the difficulties, he pushed himself forward and became an athlete; a Paralympic athlete who won a medal and has been an inspiration to many disabled persons who think that they cannot handle the challenges in their lives. Let's look at the article.

Article: He does everything. Works out at the gym, walks on the treadmill, sign on the books he wrote. Quit amazing considering that Bob Lujano is doing everything without hands and legs.
When he was nine years old he got very sick due to violent bacteria. The doctors told him that he's going to die. The violent bacteria demanded a heavy price and the doctors had to cut down his arms and legs. Young Lujano decided back then, not to give himself discounts in any aspect of life. He studied hard and was also involved in sports, which is quite amazing for a person with no hands and legs.

Among all his verified activities, he also played for the American national wheelchair rugby team. They won the bronze medal at the Paralympic games.
His amazing story turned out to be a popular lectures tour. And now he's here at the Wingate College for sports education, in a conference which discusses inclusion of persons with disabilities. The book that he wrote sold out really quickly today.

The message that Lujano is trying to pass is very clear: with will power and ambition to succeed, one can get over any obstacle.

Prof. Hutzler: Persons with disabilities, who are involved in sports, tend to have higher ability to perform specific skills. We took the speakers that you heard earlier today, on a day trip to the old city of Jerusalem yesterday. The old city is not very accessible for wheelchairs. Yet, those people wondered around there with no difficulties.

Reporter: according to Bob, three things saved him: His faith in God, the supporting, family-like environment he lives in and self-realization through sports.--As translated by Naama Sh of Israel.

Israeli News June 14th, 2015, interview with Bob Lujano during his visit to Israel to speak at the ISAPA 2015, the International Symposium on Adapted Physical Activity.  Bob's voice is in English. A rough transcript of the rest is at the bottom of this page.

"Do not be anxious about anything, but in every situation, by prayer and petition, with thanksgiving, present your requests to God. And the peace of God, which transcends all understanding, will guard your hearts and your minds in Christ Jesus."  Philippians 4:6-7